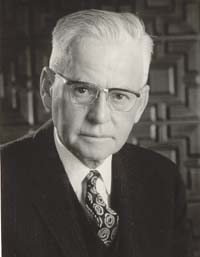 Mr. Murphy began his career with Johnson in 1918 in the accounting department.  Three years later he was made Central District auditor at the Chicago branch.  In 1938, he returned to Milwaukee and became an officer of the company when he was named secretary and assistant treasurer.  By 1950, Richard Murphy had been promoted to treasurer, vice president, and to the board of directors.

During Mr. Murphy’s presidency, the company’s sales increased from $72 million to $138 million.  His tenure was marked by the company’s continued expansion overseas, as new subsidiaries were created in several countries including Australia, Belgium, Germany, Italy, and Switzerland.