MGM Grand — Best for the Biggest!

The Milwaukee Journal reported on March 11, 1981 that Johnson Controls was designing and installing a $5 million computer-controlled fire safety system for the MGM Grand Hotel in Las Vegas.

The hotel and casino were under reconstruction after a fatal fire ravaged it in November of the prior year. To prevent such a tragedy from ever occurring again, the MGM chose Johnson Controls to install a state-of-the-art fire control system, which featured a central computer that controlled an elaborate network of sprinklers, smoke detectors, and alarms, as well as special ventilation and smoke exhaust technology.

Alvin Benedict, president and CEO of MGM Grand Hotels, Inc., stated at the time that “we are dedicated to making the MGM Grand the safest hotel in Las Vegas.”  Installation would be completed by April, and the hotel reopened in July of that year. The MGM was the largest hotel in the world, with over 2.5 million square feet of space in its three interconnected 26-story towers. Named after the famous 1932 movie “Grand Hotel,” the MGM was dedicated in theme and décor to the movie industry. 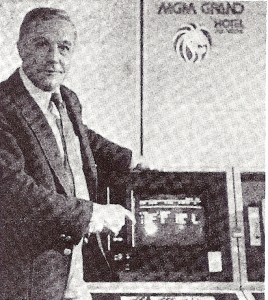