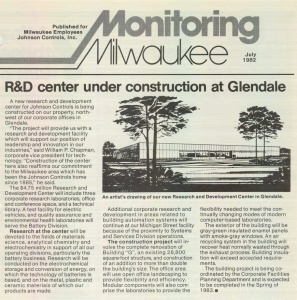 The proposed Johnson Controls Research and Development Center was featured in the July 1982 edition of the company newsletter, Monitoring Milwaukee

An article from the July 28, 1982 edition of The Milwaukee Journal reported on Johnson Controls’ proposed $4.75 million Research and Development Center to be built next to its corporate headquarters in Glendale.

The new 60,000 square-foot center was to provide Johnson Controls with a research and development facility that would include corporate research laboratories, office and conference space, a technical library, battery quality assurance and environmental health laboratories, and a test facility for electric vehicles.  Research at the facility was to be devoted to the fields of materials science, analytical chemistry, and electrochemistry, all to support the company’s operating divisions, especially the battery business.

Officially opened in July 1983, the Battery Technology Center (as it was eventually named) incorporated a unique, energy-saving air-recycling and heat-recovery system controlled by the company’s own direct digital control product, the DSC-8500.