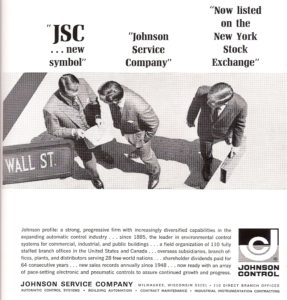 October 11, 1965 marked the first day that Johnson Service Company (the former name of Johnson Controls) was listed on the New York Stock Exchange.

An article in the Milwaukee Sentinel reported that 1,608,814 shares of common stock, plus 34,800 shares “reserved for exercise of qualified stock options,” were listed on the Big Board in the company’s debut.

Previously, the stock was traded in the over-the-counter market. (Emphasis by editor)

Richard J. Murphy, president of Johnson Service, purchased the first 100 shares of stock at a ceremony with Keith Funston, the president of the Exchange.  Murphy commented that “the listing will benefit our shareholders by providing a more accessible market, uniform price information, and broader ownership of the company.”

The stock was assigned the symbol JSC, which changed in December 1974 to JCI when Johnson Service Company became Johnson Controls, Inc.

The closing price of the JSC stock at the end of its first day of trading was $43 per share.