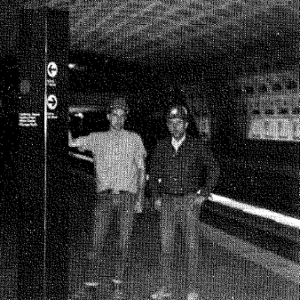 Johnson Controls lead mechanics Benny Simpkins (electrical) and Jim Stewart (pneumatic) are photographed standing next to an air conditioning pylon in the platform station; Johnson thermostats were installed in the pylons, which served as outlets for the air conditioning systems

Johnson Controls’ Washington D. C. branch office was awarded temperature control contracts for many of the underground stations, including all stations in the first phase of the subway system.

Metro presented Johnson Controls with some new experiences in material handling and access to the various work areas.  Per project coordinator Mike McCarthy, “material had to be lowered (or carried) 60 or 70 feet into a tunnel or station at a designated location and then transferred several blocks through tunnels and station vaults before it could be installed.”

And in areas where testing had not yet begun, tubing and tools were moved down the tunnels by means of small flatbed push carts which ran on the tracks.  Even those presented problems – since the gauge of newly laid tracks was not always uniform, derailments were not uncommon.

The Metro, billed in 1976 as the “largest civil engineering project under construction in the world,” was completed in January 2001, and encompassed 103 route miles and 83 stations.