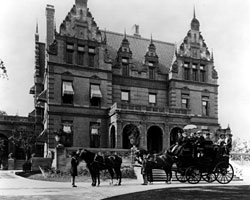 On May 25, 1889, the Johnson Electric Service Company (Johnson Controls’ initial name) sold contract number 1316 to Captain Frederick Pabst for installation of a temperature regulation system in his soon-to-be-built home.

Pabst was originally a ship captain who married Maria Best, the daughter of the founder of Best Brewery, in 1862.  Eventually, Pabst was taken into partnership in his father-in-law’s brewery, where he became president in 1873.

His plans for building a mansion on Milwaukee’s Grand Avenue (where several other of Milwaukee’s wealthiest citizens built their homes) began to take shape in 1889, but groundbreaking would not occur until the following year.  The mansion was completed in the summer of 1892 at a cost of $254,000, including furnishings and artwork. 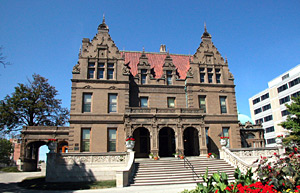 The Pabst family lived at the mansion from 1892 until 1908 (Captain Pabst passed away in 1904), when it was sold to the Archdiocese of Milwaukee.  The non-profit Wisconsin Heritages, Inc. (WHI) purchased the mansion in the 1970s, and opened it to the public in 1978.  The mansion, a monument to the “Gilded Age,” continues to be restored to its original glory.