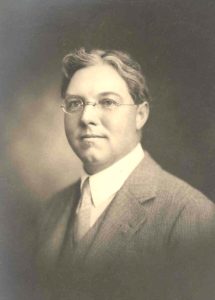 Paul Franklin Johnson, the first son of Johnson Controls’ founder Warren Johnson, was born in Wisconsin in October 1874.  Johnson began working in his father’s business at the age of 13, well before his graduation from M. I. T. in 1898 with a degree in mechanical engineering.

Returning to the company after graduation, Johnson had a hand in a number of different projects.  He was responsible for erecting the pneumatically-operated tower clock in Philadelphia’s City Hall.  He also assisted his father with his wireless telegraphy efforts and, in 1900, a wireless exhibit they submitted together with Charles Fortier won second place at the World’s Fair in Paris. Paul Johnson also earned a patent for developing a means to adjust thermostats.

Although Paul Johnson moved with his family to California in the early 1910s, he continued to hold the office of company secretary from 1899 until his death, or for 47 years, longer than any other employee holding that position.

Back in 1913, Paul Johnson identified his “favorite amusements” as automobiling, travel and photography.