Plastic versus paper: the eternal debate 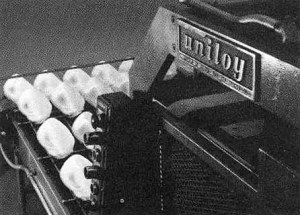 This Uniloy blow molding machine is seen churning out plastic milk bottles at Hoover, circa 1970

The Alabama Journal of Montgomery, Alabama reported on October 21, 1970 that people buy more milk when it’s sold in plastic jugs than paper cartons.

A spokesman for Pet, Inc., said that even though it costs more for the distributor to put the milk in plastic, it makes more profit.  The article quoted several sources that were debating whether or not milk in plastic jugs should cost more for consumers, since the bottling cost was higher.

Also quoted in the article was a representative of Hoover Ball and Bearing’s Uniloy Division, a leading supplier of blow molding machines that produced plastic milk jugs.  Uniloy’s Samuel Rupert pointed out that if individual distribution companies had their own blow molding machines, the price would be lower than using paper cartons.