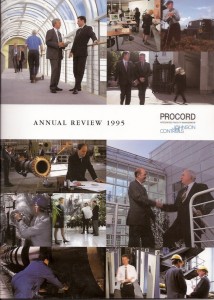 Cover of the 1995 Procord Annual Review

The Johnson Controls “Briefing” newsletter from August 22, 1994 announced that the company offered to buy 100% of the stock of Procord Limited, a facilities management company in the United Kingdom, from its employees, management, and IBM.

Procord, formed in 1991 following a management buy-out of the property division of IBM, had sales of $120 million in 1993.  Its 360 employees managed over ten million square feet of commercial space in England for customers such as British Petroleum, British Gas, and IBM.

The acquisition, completed later that year, enabled Johnson Controls to aggressively pursue opportunities for operations and maintenance services in Europe, and also improved the company’s ability to support all of the worldwide facilities of its global customers.