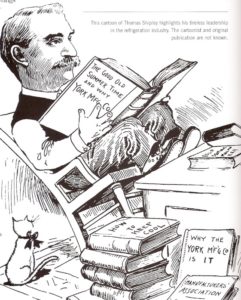 Thomas Shipley, the man responsible for transforming the York Ice Machinery Corporation (later York International, which was acquired by Johnson Controls in 2005) into the largest refrigeration equipment manufacturer in the nation, was also instrumental in standardizing the refrigeration industry.

Shipley had joined the Frick Company in 1886, where he gained a growing reputation in the refrigeration industry as an innovator.  Unhappy with the conservative business atmosphere at Frick, Shipley didn’t hesitate to sign on with York when he was offered a free hand to manage the company by York president Phillip Glatfelter in 1897.

He immediately set about to modernize the company’s organization and equipment.  York’s business had improved so dramatically by 1899 that Glatfelter promoted Shipley to vice president in that year.  By 1906, the company employed over a thousand workers, had established branch offices across the country, and had begun sales overseas.

While Shipley was building York into an industry giant, he was also pushing other refrigeration manufacturers to join together in order to establish standards for the industry.  By doing so, Shipley sought to make it easier for consumers to compare products, while making it easier for manufacturers to set prices as well.  Reluctant at first to work with each other, eventually Shipley was able to get the leading refrigeration companies to put aside their rivalries to work towards mutually beneficial standards.

In 1903, the Ice Machine Builders Association of the United States was formed and, a year later, the American Society of Refrigerating Engineers.  Under the auspices of the former group, Shipley began testing in his laboratory on September 16, 1903, to set the conditions under which a standard ton of refrigeration could be calculated.  After further tests in October 1903, the refrigeration manufacturers agreed to a standard rating system for compressor capacity.  Thus the eventual standardization of the refrigeration industry was begun.

Meanwhile, Shipley continued his work at York, where he was named president in 1927.  Shipley passed away three years later in 1930.