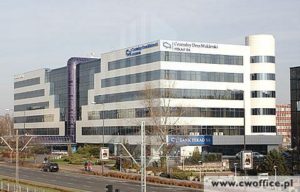 The Curtis Plaza in Warsaw, Poland was completed in 1994

Johnson Controls’ Briefing newsletter from March 18, 1992 announced that the company had secured its first major building controls installation in Poland since the fall of communism in Eastern Europe.

According to the article, the company had a $650,000 contract to install the integrated controls system for Curtis Plaza, a 170,000 square-foot office building in Warsaw.

In anticipation of new markets opening up in post-Iron Curtain Europe, the company’s Controls Group had opened sales offices in Warsaw, and in Prague, Czechoslovakia in 1991.  However, the company’s history in Poland goes back to the early part of the last century.  A company catalog from 1907 lists a sales agent in Warsaw by the name of Drzewiecki and Jezioranski.

Two years earlier, an article in the April 14, 1905 issue of The Evening Wisconsin recounted the story of William Gehrs, a Johnson Service Company (Johnson Controls’ former name) engineer who had found himself in the midst of a revolutionary uprising in Warsaw (which was then part of the Russian Empire).  Gehrs was in Warsaw to supervise the installation of a temperature regulation system in the Warsaw Technical Society building.