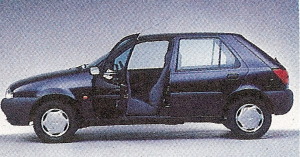 The new seating plant in Sao Bernardo was built to produce seats for Ford vehicles, including this 1996 Fiesta

The “just-in-time” plant, the company’s first automotive complete seat facility in South America, would serve as the primary supplier of seats for Brazilian-produced Ford vehicles.

Johnson Controls vice president and general manager Chip McClure stated that “our expansion into Brazil reflects our strength and our global strategy.  Johnson Controls is supporting its automaker customers as they grow in emerging markets around the world.”  The Brazilian operation was expected to produce approximately 200,000 complete seats annually beginning in 1996.