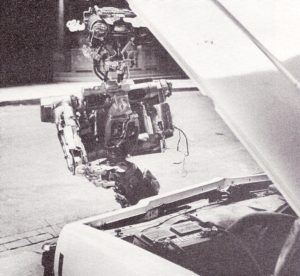 Johnson Controls employees, especially those in the Battery Group, might have felt a certain pride when watching the movie Short Circuit 2, which opened in theaters on July 6, 1988.  The movie was a sequel to Short Circuit (1986), which told the story of “no. 5,” a mobile military robot which becomes sentient after being struck by lightning.

Short Circuit 2 continues the tale of “Johnny 5” (as “no. 5” has renamed himself), as the conscious machine gets into all sorts of trouble when he ventures into the big city.  At one point in the film, as “Johnny 5” runs low on energy, he uses a Johnson Controls-made Sears DieHard battery to recharge himself.

According to Sears’ field sales manager George Christensen, the DieHard was also “the highest recognized battery sold in America, with 95 percent recognition in some markets.”  It’s no wonder “Johnny 5” used the DieHard when he needed an energy boost.