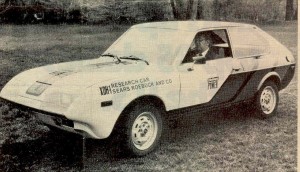 As rising gasoline costs and concerns about the long-term sustainability of our country’s oil supply spark interest in electric and gas/electric hybrid vehicles today, so was the case in the late 1970s.

One of these was the Sears XDH-1, which was the subject of an article in the May 16, 1977 issue of Automotive News.  The XDH-1, designed and engineered by Globe-Union, was a modified Fiat 128-3P which was powered by twenty experimental Sears DieHard batteries made by Globe-Union.

The XDH-1 could be recharged at any 110 or 220 volt outlet at a cost of about $0.85 for a full charge.  Even though the experiment was a success, Sears announced that it had no plans to mass produce the vehicle.