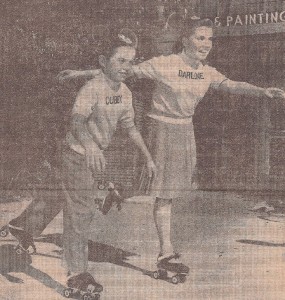 The January 16, 1957 issue of the Milwaukee Sentinel announced that Globe-Union and Disney were teaming up to sell roller skates. In the previous year, Globe had applied for and received (over two other roller skate manufacturers) a license to use the Mickey Mouse and Mouseketeer names on a line of roller skates.

The partnership marked Globe-Union’s entrance into the franchised merchandise field.  “Mickey Mouse” skates were designed for beginners, and “Mouseketeer” skates were aimed at older children.  Both of the new skate brands were introduced at the New York Toy Fair in March 1957.

The skates led to a 30% increase in Globe-Union’s roller skate sales in 1957.  Despite healthy sales, Globe ultimately sold its roller skate operations to the Aluminum Specialty Company of Manitowoc, Wisconsin in 1965.  Globe management had decided by then that roller skates no longer fit with the company’s other product lines, including batteries and electronics.

Globe-Union was acquired by Johnson Controls in 1978.