To Customer Expectations . . . and beyond! 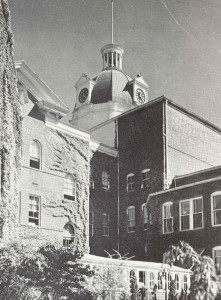 The Newark Sunday News from December 14, 1958 reported that the tower clock at Centenary College in Hackettstown, New Jersey, donated to the college in 1903 by the Johnson Service Company (Johnson Controls’ former name), was the last of its kind still running.

The discovery of the clock’s unique longevity occurred when repair parts were ordered from the company, and the college was informed that the parts had not been made in many years.  Johnson Service Company further informed the college that it had the last pneumatic tower clock known to be functioning with its original equipment.

The Johnson Service Company manufactured tower clocks, which ran on the power of compressed air (electricity was not considered at the time to be an efficient means of powering the clocks), from the mid-1890s until 1912.

Originally run by water pressure, the compressor which powered the Centenary College clock was eventually run via an electric motor.

The article indicates that Johnson Service “saw to it that the needed parts were made,” and the clock was returned to working order.

In 1960, the company converted the clock to run entirely on electricity at no cost to Centenary College.