Warren Johnson was granted his first patent on July 24, 1883 for the “electric tele-thermoscope,” an electric room thermostat. This device was actually only one component of a system devised by Johnson that was to radically change how temperature was controlled within buildings.

Interestingly, the impetus behind Johnson’s invention was not the desire for fortune or fame, but for peace and quiet.  While a professor at the State Normal School in Whitewater, Wisconsin in the late 1870’s, Johnson found his classes noisily disrupted once every hour or so by the school janitor.  Specifically, the janitor would come into the classrooms to read the thermometers and determine if the room was too hot or too cold.  If either, he would return to the basement to adjust the furnace dampers accordingly.

In order to eliminate these hourly disruptions, Johnson installed electric thermostats in each room and connected them to annunciators, so called that when the thermostat made contact on the warm side, the indicator for that room would show “warm” and ring a bell in the basement; and when the contact was on the cold side, the indicator showed “cold” and rang a bell.  As a result, rather than checking each classroom on an hourly basis, all the janitor had to do was listen for a bell and shift the proper damper when it rang. 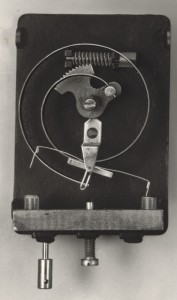