Johnson Controls’ founder Warren Johnson is remembered mainly for his invention of the temperature-regulating apparatus that served as the basis for what is now a Fortune 100 company.

However, his restless inventiveness was not limited to the field of temperature regulation, as he invented a wide range of objects including pneumatic tower clocks, automobiles, springless door locks, chandeliers, puncture-proof tires, thermometers, side-by-side bicycles, and hose couplings for providing steam heat to passenger railcars.  Johnson received over fifty patents in his lifetime.

On April 23, 1901, he was awarded U. S. patent 672,507 for “new and useful Improvements in Gas-Machines” that was originally applied for on October 8, 1898.  The carburetor, or “Gasoleum Machine” (as the company called it) was designed to be “simple, compact, and durable in construction and automatic, noiseless, economical, and reliable in operation, that will supply at a comparatively small cost gas of uniform quality and at a uniform pressure under all conditions, that will utilize all of the oil without leaving a residuum, and that will require no care or attention, except to supply oil at long intervals.”

While the device proved successful in operation, it was only on the market for two years and then abandoned (the company tried unsuccessfully to enlist Standard Oil as the sole distributor). 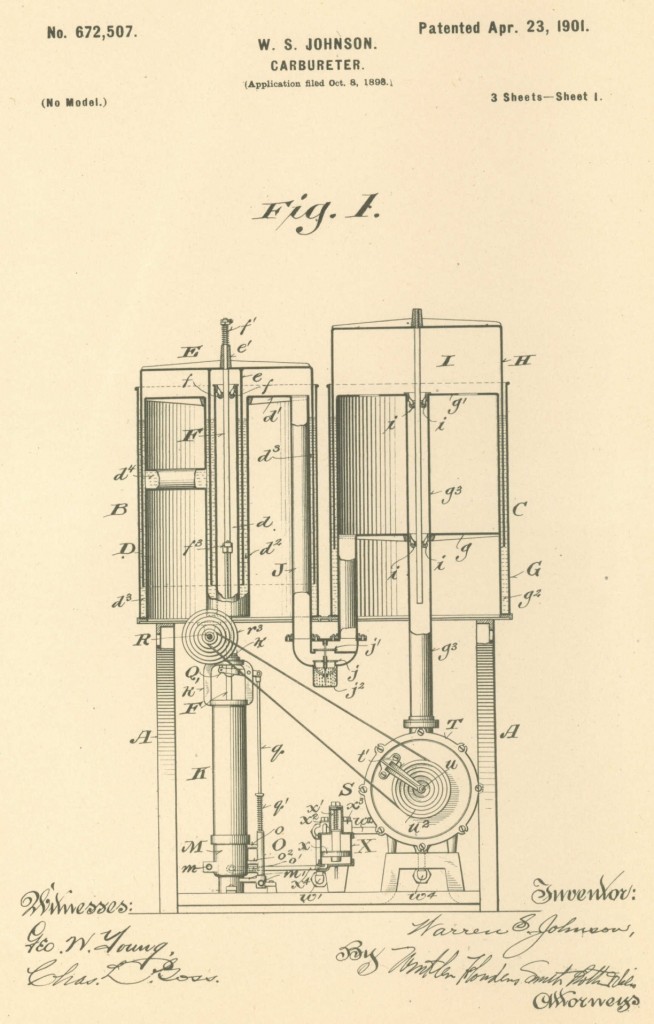 Drawing of the carburetor from U. S. patent 672,507 awarded to Warren Johnson