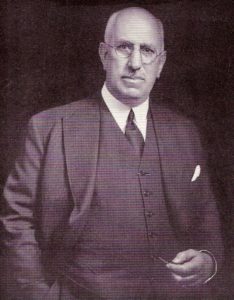 William Shipley, York Corporation chairman of the board, died unexpectedly at the age of 71 on January 13, 1951.

Shipley, who was the youngest brother of former York president Thomas Shipley, joined the York Manufacturing Company in 1900.  Shipley spent four years with York in a variety of jobs before becoming a partner in the firm of S. J. Shipley and Company, which engaged in the selling and construction of York refrigerating machinery.

When the York Manufacturing Company reorganized and merged with its sales companies (including the Shipley Construction and Supply Company) in 1927, William Shipley was named vice president and eastern manager of the new company (the York Ice Machinery Corporation), while his brother Thomas was named president.

Shipley became vice president in charge of sales in 1929, corporate president in 1930 (after Thomas died), and chairman of the board in 1940.

Shipley’s time as York’s leader is probably best remembered for his development of the “York Plan” during World War II.  The “York Plan” was a plan for cooperation among manufacturers to “do more with less” in order to minimize the cost of retooling for war production and to fulfill government defense contracts more efficiently.  The Plan soon became the model for the national war production effort.

Shipley retired from day-to-day activity at the company in 1948, but continued as chairman until his death.