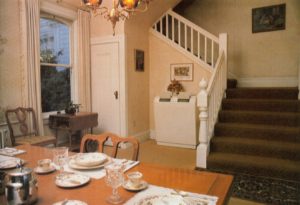 On November 10, 1970, the California Governor’s Mansion was added to the National Register of Historic Places.

The thirty-room, three-story mansion was built in 1877 for local hardware merchant Albert Gallatin in midtown Sacramento.  The State of California purchased the house in 1903 to serve as the governor’s mansion – a function it served for 13 governors until 1967, when Nancy Reagan, wife of newly-elected governor Ronald Reagan, decided the house was unsafe after having lived there for four months and refused to take up permanent residence in it. She subsequently spearheaded plans to build a new governor’s mansion in Carmichael, northeast of downtown Sacramento.

After the Reagan’s moved out in 1967, the mansion was turned into a museum and opened to the public.  It was not until December 2015, when Governor Jerry Brown moved in, that the mansion was used again as a residence.  Ironically, Brown’s father, Pat Brown, was the last California governor to live in the mansion prior to that time (from 1959 to 1967).  Jerry Brown himself refused to live in the mansion during his first two terms as California governor (from 1975 to 1983), preferring to reside in a modest apartment instead.

Over the years, the house has undergone several renovations, the last a $4.6 million project just prior to Jerry Brown’s taking residence there.  In a previous 1994 upgrade, York International (which was acquired by Johnson Controls in 2005) installed its new state-of-the-art Triathlon cooling and heating system.

Still on the job, however, was a 1928 York air conditioner in the “Breakfast Room.”  The unit was described by a Mansion tour guide as “the best-working refrigeration unit in the mansion – and a very quiet one for the wood casing absorbs the sound very effectively.”