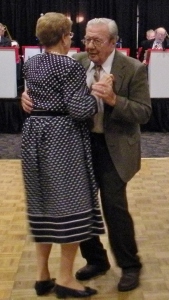 Norm and Carolyn at Reunion 2012

Norman was born in Oostburg, WI on July 22, 1924 the son of the late Edward and Delia (nee Westerbeke) Janisse. Norman served in the United States Navy, and later graduated from the University of Wisconsin Madison. He worked for Johnson Controls for over 40 years as an electrical engineer. Norman resided in Grafton most of his life, and was a former member of St. Paul’s Lutheran Church. Norman was an avid hunter. He also loved woodworking and carpentry.

The obituary is short and to the point. That would fit Norm’s style. But I’m sure that many of you could add stories of what Norm meant to you in your career at Johnson Controls, professionally and personally. Norm was always a people person. He made a career out of helping people. He set ASHRAE standards, and solved lots of building control problems, but for me, his biggest contribution was always being there to help whenever we asked.

Thanks Norm, we’ll all miss you.

Here’s another news story published in a local newspaper: News Article: Norm Janisse. Thanks to Marge Phillips and Steve Thompson for sending this to us.