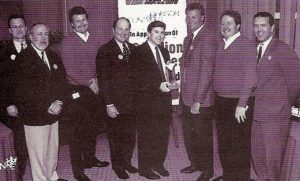 On February 20, 1995, Johnson Controls held a celebration at its Battery Group headquarters in Glendale, Wisconsin to commemorate the shipment of its 10 millionth battery to auto parts retailer AutoZone.

Johnson Controls had been supplying AutoZone with batteries since 1988.  Just two months earlier, the two companies had signed a multi-year agreement for Johnson Controls to supply all of AutoZone’s batteries.