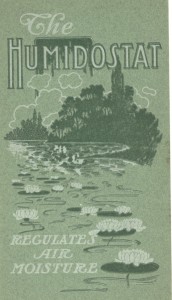 The front cover of a Johnson catalog describing the new “humidostat”

The invention referred to was the “humidostat,” a device that measured the moisture content of indoor air in order to increase or decrease it – much as a thermostat controls indoor air temperature.

The Milwaukee Sentinel article described, in the somewhat flowery style of the day, the new product in this way:

“The seemingly fanciful ideas of the Arabian Nights are becoming reality in this 20th century.  Prof. Johnson has invented a device to furnish moisture to the air of rooms.  Has an attachment by which air is perfumed at will … and may be changed to give prismatic scale of odor … .”

Johnson, in his patent application, offered this description:

“This invention pertains to a device for measuring or ascertaining the percentage of moisture in the surrounding air or medium, and … according to variations in such percentage, a device for supplying or adding moisture to the air … .”

He went on to note the device is primarily designed for use in or as a part of a complete system that includes a humidifier, as well as heating and temperature-regulating apparatus.