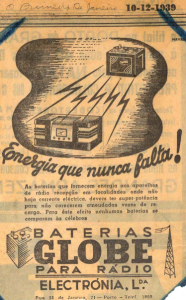 Company involvement in the international battery business goes back a number of years, as evidenced by an October 12, 1939 advertisement for Globe-Union radio batteries in the Porto, Portugal newspaper O Primeiro de Janeiro.

“Energia que nunca falta!” reads the headline of the ad, translated as “Energy that is never lacking!”

The ad explains that Globe batteries provide energy to localities that have radio reception, but don’t have electric power.  Apparently, the batteries were super-charged, so they needed recharging less often.  For this reason, the ad declares, “No others can be compared to these celebrated batteries.” The advertisement also includes an address in Porto (Rua 31 de Janeiro, no. 71) where individuals could purchase the radio batteries.

Globe-Union (which Johnson Controls acquired in 1978, becoming today’s Power Solutions Business Unit) had been manufacturing batteries for radio sets since the early 1920s.  In fact, the company actually made radio sets from 1923 to 1926, but switched to producing radio components with the purchase of Central Radio Laboratories (Centralab) in 1925.  It is not known when Globe began marketing their batteries overseas, but it is known that they were making sales in Cuba by 1930.