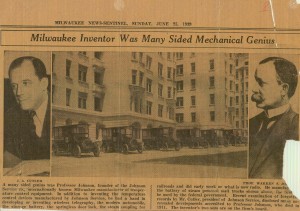 Article from the June 25, 1939 edition of the Milwaukee News-Sentinel shows Johnson Service Company president Joseph Cutler, at left, company founder Warren Johnson on the right, and, in the middle photo, postal trucks (circa 1910), the first of their kind, designed by Johnson and lined up next to a downtown Milwaukee apartment building

“In a forgotten corner of the Johnson Service Company’s [Johnson Controls’ former name] plant on E. Michigan St. last week, a workman discovered the design for an automobile which he recognized as the work of Prof. Warren S. Johnson, founder of the concern and inventive genius.”

So began a Milwaukee News-Sentinel article from June 25, 1939.  The article went on to state that “the design found its way into the office of J. A. Cutler, President of the Company … and, together with other ‘old timers,’ he began a hunt through old records and in storerooms for other material recalling the unusual mechanical achievements of Professor Johnson.”

The examination of the forgotten records disclosed many unrevealed developments accredited to Professor Johnson, who died in 1911.  Besides temperature regulation systems, the business on which Johnson Controls was founded, Professor Johnson worked on a number of inventions including automobiles, wireless communication, tower clocks, storage batteries, steam couplings for railroad cars, and a push button toilet flushing device.