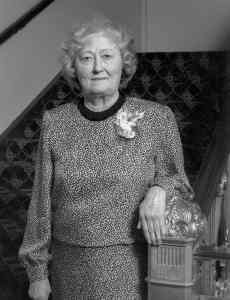 On September 3, 1990, Florence Klatt, an employee of Johnson Controls for fifty years, passed away at the age of 69 from complications due to an auto accident.

Klatt joined the company in 1939 after graduating from St. John’s Cathedral High School in Milwaukee.  She worked as an executive secretary to three company presidents – Joseph Cutler, Richard Murphy, and Fred Brengel.  Klatt became the first woman to serve as an officer of Johnson Controls when she was appointed assistant secretary in 1979.

She also served as secretary of the Johnson Controls Foundation Advisory Board for about 18 years, and was active in the employee volunteer group.  The Employee Volunteer of the Year Award was named in honor of Klatt, and in November 1990, the Johnson Controls Foundation endowed a $100,000 scholarship at Marquette University in Milwaukee in her honor.