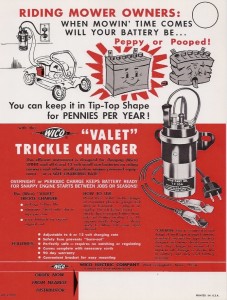 On July 10, 1956, the Farm Implement News announced that Globe-Union had acquired the assets of the WICO Electric Company, one of the nation’s largest producers of ignition equipment for outboard motors, lawn mowers, farm machinery, chain saws, and other small internal combustion engines.

Based in West Springfield, Massachusetts, WICO had 1955 sales of around $5 million, and had about 600 employees.  Globe president C. O. Wanvig, Sr. stated that “WICO’s extensive research and manufacture of magneto ignition devices will be an excellent supplement to our present activities and enable us to broaden our sales potential.”

At that time, Globe was a leading manufacturer of batteries and, through its Centralab division, electronic components.  WICO was to be operated as a division of Globe and retain its management and plant location, as well as its corporate identity.

In 1967, Globe-Union sold WICO to Prestolite Co.  Globe-Union merged with Johnson Controls in 1978, thereby marking the latter company’s entry into the battery business.