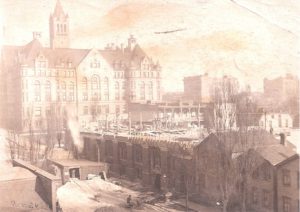 This photo, taken on November 24, 1902, shows (looking northeast) the new Johnson Service Company headquarters under construction; the U. S. Post Office, Courthouse, and Customs House (completed in 1899) can be seen in the upper left background

Johnson wanted the board to meet the architect, Mr. Esser, and the contractor, Mr. Monsted, for the new company headquarters building under construction on the southeast corner of Jefferson and Michigan streets in downtown Milwaukee.

The intent of the meeting, stated President Johnson, was to see if the board could convince Monsted, who had been delaying work on the new building, to take up work on the building “with more vim and earnestness.”

By the end of the meeting, Monsted agreed to accelerate work on the building, declaring he would lay concrete on any day when the outside air temperature was not less than 25 degrees above zero.  The building, the first built of reinforced concrete and brick in Milwaukee, was eventually completed by August 1903.