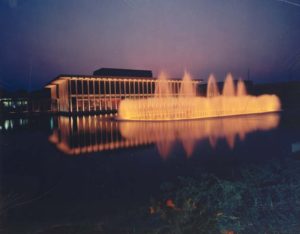 The Milwaukee Journal showcased the new Globe-Union research park in Glendale with an April 14, 1968 article entitled “A Glittering Park for Globe-Union.”

Highlighting the new facility in words and photos, the article stated “from the moment the visitor first lays eyes on Globe-Union’s research park in Glendale, he cannot help but be impressed with the beauty and form that have made the firm’s administrative headquarters a glittering new jewel in Milwaukee’s industrial crown.” Designed by Charles H. Harper and Associates, the 33-acre design featured a “20th century setting” built over water.

The park was completed in the summer of 1967 at a cost of $5 million, and dedicated under local media blitz on October 11, 1967.  Among the dignitaries in attendance was Wisconsin Governor Warren Knowles.

In recent years, the campus underwent a $73 million renovation that incorporated many of the company’s energy-efficient products and designs with the objective of making the campus the first LEED®-certified platinum facility in the state.