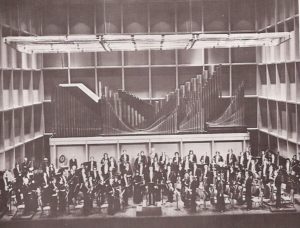 The Milwaukee Symphony Orchestra circa 1977

The December 10, 1980 edition of the Johnson Controls newsletter Briefing reported that the Johnson Controls Foundation had made a grant of $500,000, the largest grant in its history up to that point, to the Milwaukee Symphony Orchestra. The grant was to be made over a period of five years to the Symphony’s capital fund.

Organized for charitable purposes, which included distribution and application of financial support to philanthropic organizations or causes, the Foundation currently specifies four areas of giving: health and social service; education; culture and the arts; and civic activities.  Each year the Foundation distributes grants of more than $8 million to select non-profit organizations primarily located in the communities in which the company has a presence.