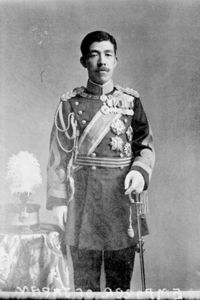 Crown Prince Yoshihito (later named Emperor Taisho posthumously) ordered an extensive remodeling of the Akasaka Palace at the turn of the twentieth century, changing it into a lavish European rococo-style building.  Emperor Taisho’s son, Crown Prince Hirohito, spent his childhood in this palace before becoming Emperor when his father passed away in 1926.

In July 1901, the Johnson Service Company’s New York branch office signed contract number 635 to outfit the Palace with 138 thermostats, 2 valves, and other “material for completion” totaling $2,381.  Payment of the final invoice was extremely prompt – the final $552 was paid in full only a month later, on March 29, 1906.