Alliance Service in the UK 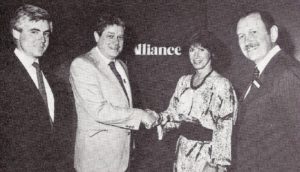 On June 26, 1986, at an event at Claridge’s Hotel in London, Johnson Control Systems Limited launched its Alliance program of building services in the U. K.

The Alliance program, which had been introduced in the United States in October 1984, consisted of many existing programs, including Custom Programmed Maintenance.  The goal of the Alliance program was to allow customers flexibility in their choice of the scope and depth of their involvement in the maintenance, repair, and management of their building’s electrical and mechanical systems.

U. K. national operations manager Grant Langley served as host of the U. K. Alliance kick-off event, which welcomed many property owners and building managers.  Joe Lewis, Controls Group vice president, explained the corporate commitment to the Alliance program.  Also on hand was BBC-TV’s Valerie Singleton, who presented a brief history of Johnson Controls and its business values.