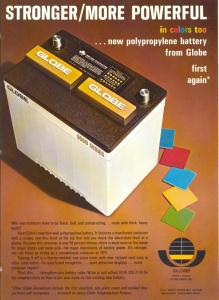 It was announced on September 18, 1968, that Globe-Union had won first prize in the category “Developments in Battery Technology and Research” at the International Lead Conference in Venice, Italy. The award was given for development of a polypropylene battery case that made room for the use of more energy-producing materials in the same-size cube as conventional batteries.

At the time the award was bestowed, Globe’s Battery Division had already begun production of the new battery containers, which were considered to be one of the most significant improvements in the battery industry in many years.  In addition to being superior in strength, the containers were approximately five pounds lighter than conventional hard rubber cases.  The thin walls of the plastic containers, which were 50 percent thinner than standard battery cases, made it possible to incorporate more and larger plates and greater volume of electrolyte without an increase in the outside dimensions of the case.

Globe-Union was merged into Johnson Controls in 1978, which marked the latter company’s entry into the battery business.