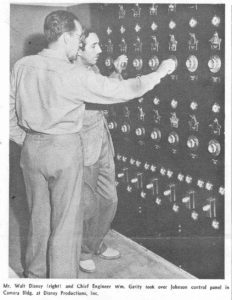 The Johnson Service Company (Johnson Controls’ former name) installed complete control systems in all of the studios, artists’ rooms, and in all of the buildings where painting and photography were carried out.

The varied climate needs of each building called for an equal number of specialized systems to meet those needs.  For instance, in the buildings where film was handled, the relative humidity had to be maintained at a constant 65% to prevent accumulation of static electricity.

Walt Disney was able to fund the building of his new studio complex with the success of Snow White and the Seven Dwarfs, the first American-made feature-length animated movie and the first animated movie made in Technicolor.

Before Snow White, Disney was best known for his Mickey Mouse character, which appeared in a number of animated short features beginning in the 1920s.  After Snow White, the Disney Studios went on to produce a succession of classic animated features such as Bambi, Fantasia, Pinocchio, and Peter Pan that are considered classics of the genre, as well as a series of popular cartoons featuring characters like Donald Duck, Goofy, and Pluto.

In the 1950s, Disney’s growing empire began to make live-action movies, produce a long-running television series, and, in 1955, opened the Disneyland theme park near Anaheim, California.  Even after Disney’s death in 1966, the company he founded continued to expand into what is today a multi-billion dollar vacation destination, and motion picture, television and media corporation.