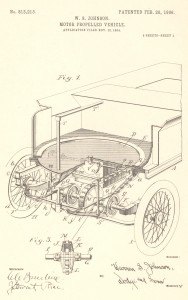 An illustration in Warren Johnson’s patent 813,213 depicting the truck’s “fifth-wheel”

Another design element was the minimum amount of space the generator occupied.  This characteristic made it particularly well-suited for use in auto-carriages (i. e., automobiles), which at that time were powered by steam, as space within the engine area of the auto was quite limited.

The automobile was a passion of Warren Johnson’s and, by this time, the Johnson Service Company (Johnson Controls’ former name) had manufactured vehicles of one sort or another for five years.

Patent number 813,213 was for “New and Useful Improvements in Motor-Propelled Vehicles.”  This invention was designed to “afford convenient means and adequate power for steering or turning heavy vehicles – such as warehouse-trucks, vans, and large passenger-vehicles – quickly, certainly, and in small space.”

Sounding suspiciously like a forerunner of power steering, Johnson goes on to describe his invention as engine power applied to the wheels and “connected with the body of the vehicle by a turn-table or fifth-wheel.”  Between the engine and the wheels there was a differential gear which allowed the two front wheels to “be driven simultaneously and equally or either wheel alone or the two wheels at different speeds.”

Johnson used this technology quite frequently in the ensuing years in various models of the Johnson truck, as well as other vehicles.