Battery Open House at Canby OR 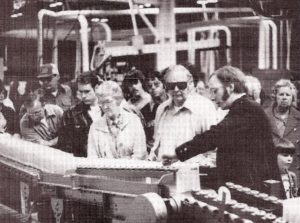 Johnson Controls’ battery plant in Canby, Oregon (which is about 20 miles south of Portland) held an open house on April 28, 1979 in order to let the public view the new 74,000-square-foot addition to the plant. The newly expanded plant was the city of Canby’s largest at 134,000 square feet.

Over 1,500 local residents took the tour of the expanded plant, during which they were shown the various steps in the manufacture of automotive batteries.

According to plant manager Charles Wood, the expansion was needed to meet rising demand for the company’s private label automotive batteries by customers such as Sears, NAPA, and Ford.