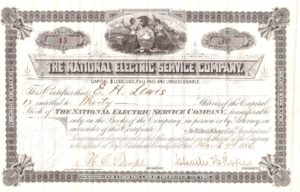 On June 25, 1900, August H. Vogel, Amos A. L. Smith, and company founder Warren S. Johnson signed the Johnson Electric Service Company’s (as Johnson Controls was then known) Articles of Association, beginning the process of reincorporation in the state of Wisconsin for the fifteen-year-old company.

Although the company had been originally incorporated on April 22, 1885 (as the “Johnson Electric Service Co.”), Warren Johnson and the company’s board of directors felt that the company needed to be reincorporated as part of a plan to dissolve and consolidate several company agencies that had proven to be troublesome.

On June 16, 1885, the company had granted M. B. Cary and Z. S. Holbrook of Chicago the right to use and sell company equipment and to authorize others to do the same throughout the United States (with the exception of Wisconsin and Minnesota).  Cary and Holbrook were expected to establish a network throughout the country to sell, install, and service company apparatus.

In order to fulfill this commitment, Cary and Holbrook formed the National Electric Service Company of New York (NESC).  Subsequently, the NESC organized sales agencies in Buffalo, New York and New York City, as well as in the states of Michigan and Colorado.  However, by February 1886, the Johnson Electric Service Co. (JESC) was already serving notice to the NESC for its failure to set up a sufficient number of agencies and, later, to properly monitor those that it had established. In 1892, the JESC began purchasing agencies and sales territories from the NESC.  By 1898, Warren Johnson and the JESC board were concerned enough by the performance of the NESC and other agencies that they began planning the buyout of all the remaining independent agencies.

In 1899, Warren Johnson proposed dissolving the JESC and reincorporating the company along with the independent agencies into a unified JESC (with the “Co.” changed to “Company”) in order to assure central supervision and standardization of the branch operations.  The company’s stockholders approved Johnson’s plan at the annual meeting in April 1900, thus leading to the filing of new Articles of Association for the company, and its official reincorporation on July 31, 1900.