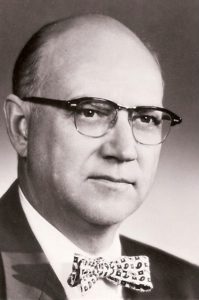 The November 20, 1955 edition of The Milwaukee Journal featured an article on Wisconsin’s electrical industry, including the Centralab division of Globe-Union (which was acquired by Johnson Controls in 1978 and sold to North American Philips Corporation two years later, in 1980).

Centralab manufactured a variety of electronic components used in televisions, radios, and other electronic products.  It was a pioneer in the development of ceramic capacitors and printed electronic circuits (PECs).

In the article, William S. Parsons, the president of Centralab, discussed the outlook for the electronics industry over the next ten years.  He predicted that closed circuit television in homes and industry, telephones equipped with television, and “world-wide television programs in color on five by seven foot, flat wall screens” would be commonplace by 1965.

Of course, all of these predictions eventually came to pass – just not by 1965.

Centralab had four plants in Milwaukee with more than 2,000 employees in 1955, as well as one Canadian plant and two others elsewhere in the United States.  As for Parsons, he remained president of Centralab until 1964, when he was named vice president and general manager of Globe-Union’s international operations.  He retired in 1969 after 31 years with the company.