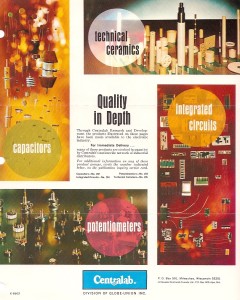 Unicon employed 250 workers in the manufacture of polystyrene and ceramic capacitors which were sold in Asia and the United States.  Globe-Union president C. O. Wanvig, Jr. stated that the Unicon acquisition would supplement the company’s line of capacitors made in Milwaukee by enabling it to produce capacitors that could not be manufactured and sold in the United States at a competitive price.

The polystyrene capacitor represented a new production item for Globe, which had previously purchased quantities from Italy for sale in the U. S.

Centralab had been a part of Globe-Union since its acquisition in 1925.  In the 1940s, the company originated integrated circuitry with the introduction of packaged electronic circuits (PECs).  By 1965, Centralab made a wide variety of electronic components for use in radios, computers, televisions, and cameras.  Two years after Globe-Union merged with Johnson Controls in 1978, the Centralab Division was sold to North American Philips Corporation.