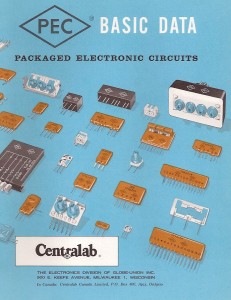 Cover of a Centralab PEC catalog from the early 1960s

Globe-Union’s Centralab division held a party on November 6, 1959, at the Statler-Hilton hotel in Washington, D. C., to celebrate the production by the division of its 100 millionth packaged electronic circuit (PEC). The 100 millionth unit was specially mounted on a plaque for the occasion and presented to David Hull, president of the Electronic Industries Association.

The PEC was originally developed during World War II for the military’s radio proximity fuse, a self-powered complete mortar fuse with the volume of a half-pint bottle, and considered a highly important secret weapon.  The modular PEC was smaller than a dime and replaced a number of separate bulky electronic components.  It essentially removed the third dimension of depth, thus paving the way for the miniaturization of electronic products.

By 1959, the PEC was used in a number of applications including hearing aids, phonograph cartridges, and missiles.  The PEC was one of a number of innovative product (mostly in regard to electronic parts such as ceramic capacitors and resistors) designed by Centralab.

In 1978, Johnson Controls acquired Centralab as part of the Globe-Union merger, but two years later sold Centralab to North American Philips Corporation.  The reason for the sale was that while the Centralab business had a good future, it was felt that Johnson Controls’ resources could be better utilized in its other business segments – namely, batteries and controls.