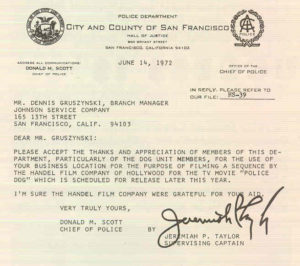 As for the movie, Boxoffice, a Hollywood trade publication, reported in January 1975 that Handel Film Corp., the same company that filmed at the San Francisco branch office, had rescheduled production on a film entitled “A Police Dog Named Duke.”

In 1981, a 50-minute film called “Police Dog” was released by the Handel Film Corp. that follows the training of a police dog and the day he saves his master’s life in the first part of the film.  The second part shows the police dog’s adventures in many U. S. cities, including San Francisco, where an officer and his dog are shown conducting a successful building search for a burglar (the building being, presumably, the San Francisco branch office).