DieHard Gold at the Top! 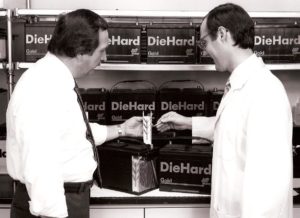 The April 14, 1989 edition of the Johnson Controls Briefing newsletter announced that Sears was introducing the DieHard Gold automobile battery to the market. The new battery, which represented Sears’ top-of-the-line in car batteries, was designed, engineered, and manufactured by Johnson Controls.

With 900 cold cranking amps and 135 minutes of reserve capacity, the DieHard Gold was the most powerful battery available in its class.  An exclusive feature of the new battery, an electro-flo system, helped give the battery its edge in power.

The electro-flo system incorporated plastic pumps within the walls of each battery cell to prevent electrolyte stratification.  By continually mixing the battery’s sulfuric acid and water, the electrolyte was evenly circulated across the battery’s plates.  This ensured ideal chemical reactions that led to maximum starting power and longer battery life.

The origins of Sears’ relationship with Johnson Controls dated back to 1927, when Union Battery signed a five-year contract to produce Sears’ batteries.  When that company (then named Globe-Union) was acquired by Johnson Controls in 1978, the relationship continued.  Sears’ DieHard line was introduced in 1967 to market Globe-Union’s revolutionary polypropylene battery case.  By the time the DieHard Gold was introduced, Sears had sold 67 million DieHard batteries, thus making DieHard America’s best-selling brand.