A Johnson Electric Service Company (Johnson Controls’ original name) contract ledger from the company’s first decade of business contains an entry dated August 31, 1887, in the amount of $2,160, for an installation in Science Hall, a new building on the campus of the University of Wisconsin.

Built to replace an earlier science building lost to fire. Science Hall is the second building in the United States constructed with steel beams and is the oldest still standing today.

UW engineering professor Allan D. Conover supervised the building’s construction with the aid of a twenty-year-old UW engineering student he had hired as a draftsman – none other than Frank Lloyd Wright.

Later that year, Wright accepted a position in Chicago as a draftsman and, ultimately, went on to a celebrated career as one of the greatest architects of the twentieth century.

Science Hall was designated a National Historic Landmark in 1994.  It is still in use today as the home for the UW’s Department of Geography. 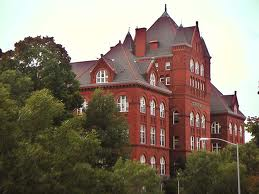