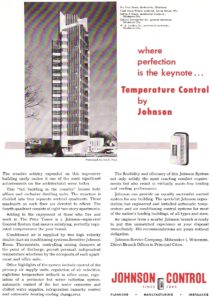 This Johnson Service Company ad from the mid-1950s features the company’s installation in the Frank Lloyd Wright-designed Price Tower in Bartlesville, Oklahoma (Click the image for a larger view)

On September 13, 1974, the Price Tower in Bartlesville, Oklahoma was added to the National Register of Historic Places.  The nineteen-story, 221-foot-high building is the only “skyscraper” designed by renowned architect Frank Lloyd Wright that was actually built.

Constructed from 1952 to 1956, the building was named for Harold C. Price of the H. C. Price Company (a local oil and chemical concern), who commissioned the building to be the company’s headquarters.  Wright designed the Tower as a multi-use building with business offices, shops, and apartments.  The H. C. Price Company was the primary tenant, with the remaining office floors and double-height apartments intended as income-raising ventures.

Wright nicknamed the Price Tower, which was built on the prairie, as “the tree that escaped the crowded forest,” referring not only to the building’s construction, but also to the origins of its design.

The Price Tower is supported by a central “trunk” of four elevator shafts which are anchored in place by a deep central foundation.  The nineteen floors of the building are cantilevered from this central core, like the branches of a tree.  The outer walls hang from the floors and are clad in copper “leaves.”

Wright had originally planned to use these design features back in the 1920s as part of an apartment project in New York City, which was shelved by the onset of the Great Depression.  Wright revived the ideas for the Price Tower, thereby plucking his “tree” out of the “crowded forest” of New York City.

The Johnson Service Company (today’s Johnson Controls) provided the temperature controls that kept the building’s occupants comfortable during Oklahoma’s scorching summers.  Today, the Price Tower is part of a civic arts complex which includes a museum (with several pieces of Wright memorabilia), a hotel, and a restaurant.