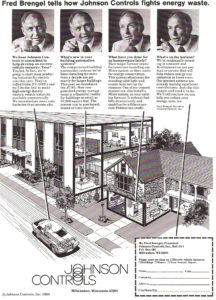 The edition of Forbes magazine for the week of October 27, 1980 included a Johnson Controls ad featuring company President and CEO Fred Brengel. It is believed that Brengel was the first company president to ever appear in an advertisement of any kind.

In the ad, Brengel briefly describes three company products that customers can use to conserve energy (and money).  The Globe EV-1000 battery was the first commercial battery designed for use in electric vehicles.  At the time, Johnson Controls was involved in a number of development projects involving batteries for hybrid and electric automobiles.

The second product mentioned in the ad, the recently unveiled JC/85 building automation system, was the descendant of the company’s groundbreaking JC/80 system introduced in 1972.  The JC/80 system was the first building automation system to employ a mini-computer designed for that purpose.  The JC/85 system, with its lower cost of installation relative to the JC/80 and its microprocessor technology, made it economically feasible for smaller buildings to employ.

The third product featured in the ad, the Mizer (short for economizer) system, was an economical and easily-installed control for use in all types of home furnaces.