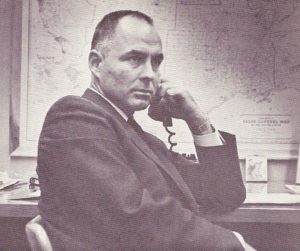 The Johnson Service Company (Johnson Controls’ former name) announced on November 22, 1964 that Fred Brengel had been elected executive vice president effective January 1, 1965.  At the time Brengel was vice president and general sales manager of the company.

Brengel was in the vanguard of a company movement in the early 1960s to install more youthful men into positions of leadership.  Brengel, a 1944 graduate of the Stevens Institute of Technology, served in the U. S. Navy from 1943 to 1946, where he saw active duty aboard the submarine U. S. S. Icefish.

He began his career with the company as a sales engineer with the New York branch office in 1948, rising quickly through the company ranks with subsequent positions as Boston branch manager, manager of the New England sales region and, by 1959, Midwest regional manager.

He was elected vice president and general sales manager in 1963, and to the board of directors in April 1964.  Brengel eventually became CEO of the company in 1967 – a post he held until 1988.

Brengel’s time as company leader was most noteworthy for a number of acquisitions made to diversify the company, including Globe-Union (in 1978), which brought the company into the battery business, and Hoover Universal (in 1985), which marked the company’s entry into the automotive seating business.

Brengel retired from active participation in the company’s management in 1988, although he continued as chairman until 1993.  He would remain a board member until 1998 – his fiftieth year with the company.  Brengel passed away in October 2000 at the age of 77.