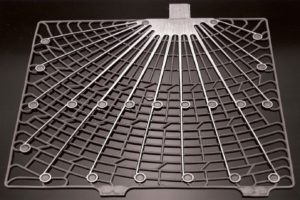 The use of lead in the combination battery grid is concentrated in the shinier metallic ribs and circles, while the duller gray ribs show where lead has been replaced with polypropylene

The Globe Battery Division of Johnson Controls introduced its new combination battery grid to the public on May 6, 1980.

The grid’s name came from the fact that it was composed of a combination of lead and polypropylene – a revolutionary departure from traditional grids made of lead alone.  Polypropylene was used to replace lead in the grid except where lead was needed for electrical conductivity.  This concentration of lead at only the key points in the battery grid resulted in a more energy efficient battery as well as a lighter one, with a 60% reduction in grid weight.

Lighter weight batteries increased gas mileage and conservation in the automobiles in which they were employed.  Polypropylene was also cheaper than lead, which resulted in reduced costs.

The development of the combination grid took five years and millions of dollars to achieve.  Other companies had sought to incorporate plastic materials in the internal design of a battery, but Globe’s engineers were the first to successfully unite plastic and lead materials through a high speed production process.