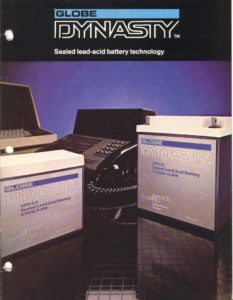 The Johnson Controls newsletter Briefing from May 31, 1983 reported that the company’s Globe Battery Division was to introduce its new Dynasty battery line that summer.  The new battery line was designed for applications where a supply of uninterruptible power was necessary.  Typical uses for the Dynasty batteries included back-up power for computer systems, building control systems, power generating systems, telephone and communications systems, and cable TV systems.

Dynasty batteries were unique in the industry as they brought the advantages of gelled electrolyte technology to larger power applications.  They also employed unidirectional vents to virtually eliminate the problem conventional back-up and uninterruptible power supply batteries had of creating a build-up of hydrogen gasses when used in confined environments.  In addition, the Dynasty line’s maintenance-free characteristics made it ideal for use in remote or limited access areas.  Another advantage of the Dynasty battery was its construction, which allowed it to be used in any orientation.