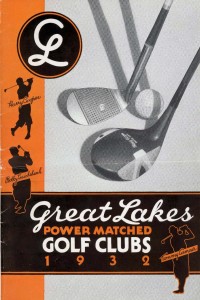 Great Lakes Golf used professional golfers such as Tommy Armour, Bobby Cruickshank and Harry Cooper to endorse their various lines of golf clubs, as seen in this 1932 catalog

On March 29, 1932, the United States Patent Office issued a design patent for a golf club to Thomas Dobson and Charles B. Johnson, assignors to Globe-Union, the predecessor company to today’s Power Solutions group.

The design patent notes that the characteristic feature of the club is “the formation of the hosel and the portion of the shaft connected thereto.”  The patent gave Globe-Union the exclusive right to make, use, and sell the new design throughout the United States for a period of seven years.

Globe-Union manufactured a number of diverse products in its early days, including ice skates and roller skates, ice cream freezers, spark plugs, and, of course, batteries.  They began manufacturing golf clubs in 1931, after acquiring the Great Lakes Golf Corporation.  The company also sold club and ball models named for (and endorsed by) some of the golfing greats of the time, including Tommy Armour, Harry Cooper and Bobby Cruickshank.  In addition, Great Lakes Golf offered a variety of golf accessories from tees and cleats to gloves and grip wax.  Globe-Union remained in the golf equipment business until 1934, when poor sales caused by the Great Depression forced the dissolution of Great Lakes Golf.