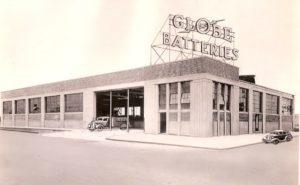 The planned facility was part of a company expansion program for 1936 which also included plans for new battery factories in Dallas and Atlanta.  The company already operated factories in Cincinnati, Memphis, Milwaukee, Philadelphia, and Seattle.

At the time, Globe manufactured roller skates, spark plugs, and electronic components (the latter through its Centralab division), in addition to its main business of batteries.

In 1962, the Los Angeles plant operations were moved to a larger, more modern facility in nearby Fullerton.

Johnson Controls entered the battery business by acquiring Globe-Union in 1978.